on March 29, 2021
Part 1 of this topic covers some prototype history of these second-hand SP cars and how I came to building one starting with an Intermountain undecorated kit. This part will cover most of the detailing and construction as far as I have progressed to date.
After figuring out what distinguishing details this car had (Carmer uncoupling levers, KD brake system, etc.) the next task was figuring out if I could find the details commercially or if they would require me to scratch-build or fabricate them.
So goes the adventure of trying a new scale. It took me some sleuthing and reading articles and blogs of other proto:48 modellers to uncover what is out there to work with.
The good news is that thanks to firms like Protocraft and Grandt Line, most of what is needed was already taken care of. What manufacturers didn't provide I could mostly make up with some brass wire and flat stock.
The Bill of Materials on this project was not too extensive, but it did add up (especially with the exchange rate and shipping):
Protocraft supplied an absolutely beautiful pair of Andrews U-section 50 ton trucks and car bolster kit for fixing the trucks to the car, top-operating couplers and Carmer cut levers, and an air hose set. Protocraft also supplied the decals. I can't say enough about the quality of Protocraft's items.

Protocraft's Andrews U-section 50 ton wheelsets. Made in brass, they add much-needed weight at a low centre of gravity and look absolutely stunning - so good you won't want to hide them under a freight car. Image courtesy Protocraft's website.

Precision Scale supplied chain for the door and brake mechanisms, Mount Albert Scale Lumber 1x6 and 1x8 for the deck (too thin but leaves room for sheet lead underneath), and an assortment of wire for grabs and brake piping rounded out most of the supplies needed.
PBL's Star Brand paint STR 31 is recommended by many for the SP freight car red on this car, but it isn't the easiest to source in Canada. More recently I came across a tip by Ken Adams to use Tamiya oxide primer and cover it with Vallejo 70.814 burnt red. I will probably go this way as I prefer acrylics to enamels and have been impressed with Vallejo's Model Air paints so far.
Step #1 = Mistake #1. I started by attaching the sidewalls provided by Intermountain to the frame. If I could do it over I would have just built up the walls using scale lumber like I am doing for the floor. This would probably not only look better (inside and out) but also allow for easier distressing and weathering of individual boards - something which would be a feature of these cars at 20+ years old. The supplied walls are too thin, I believe, and while the bolt detail on the inside is okay, the wood grain just does not look convincing. I suppose I could probably scrape it off, but I already have all of those grabs installed!
Grab irons were bent from .010 brass stock and added along with nut-bolt-washers from Grandt Line. 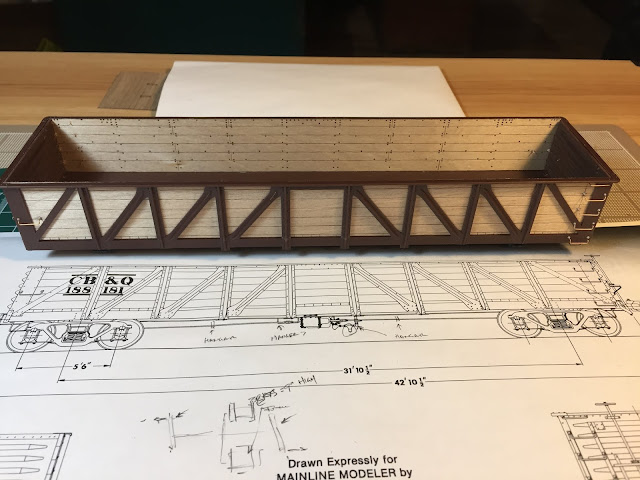 Grabs and accompanying NBW castings were added first. You can see the drawings from Mainline Modeler which I enlarged to O scale. Multiple copies help when you also use it as a notepad and to catch glue drips!

I decided to try to fabricate the end ladders myself and tossed the clunky kit-supplied versions. Using scale drawings, I cut 0.005" brass sheet and bent it 90 degrees down the length to form the ladder stiles. If I did it over again I would have cut or soldered on mounting tabs as well.
I then put the stiles in a jig made of balsa, drilled holes for the rungs, and added them. I cut the "tails" of the hand-bent rungs short and pressed them into the balsa until they were the correct distance off the stiles. The soft balsa wood helped with this. A bit of solder and everything was together - and without setting fire to the jig!
It was surprising how quick and easy it was to scratch build the ladders as this was a new thing to me. I have assembled ladders out of etched brass once before (in HO for a caboose kit) but I used CA that time instead of solder. 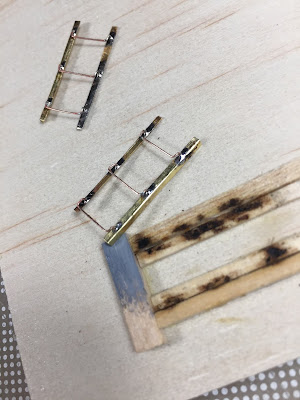 Ladders after soldering. We won't talk about how I made two the same side the first time and had to re-solder one.

Next was the underbody detail. It is a bit difficult to see from the image below, but the split K brake system is mounted on brackets formed from brass instead of the clunky mounts that came moulded-on. The train line and brake system were then installed. I used the brake components supplied by Intermountain as I didn't have others handy, but an aftermarket set would have better detail. The brake rods are attached at each end with Tichy turnbuckles cut in half to represent the clamps - a trick I picked up from Gene Deimling's blog (I think). 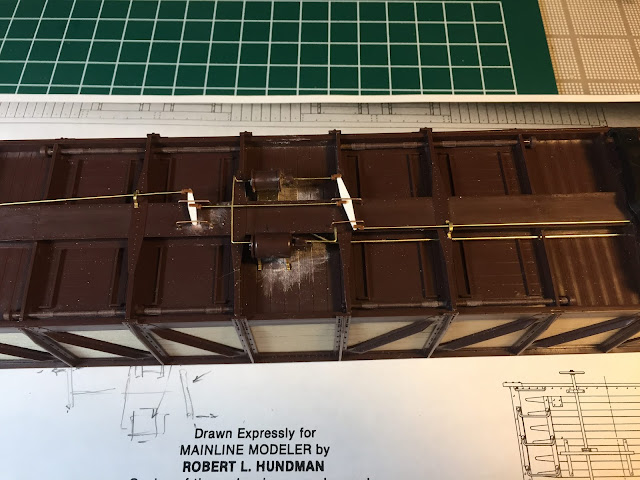 Working in O scale makes it a lot easier to fabricate all those parts for the brakes (versus HO scale anyway). But then you start thinking about how you could add pipe unions, dirt collectors, elbows, and a lot of other teeny tiny stuff you find in the Precision Scale catalogue...  maybe on the next model.
The next post will cover the finishing details, and I'll dive deep down the rabbit hole trying to scratch build coupler pockets.
Gene Deimling gondola Intermountain Southern Pacific USRA